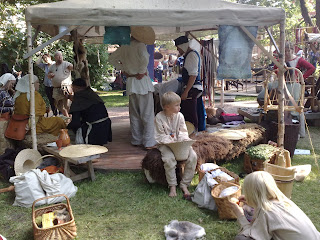 We are back from Turku Medieval Market with lots of new things. I now have for example a new back basket. I am very tired and somewhat in pain now and I don’t know why because I have slept a lot during the weekend.. it might be the warm weather? UlfR has asked twice today that why I am sighing all the time… (I don’t know… I haven’t noticed about doing that…and he is sighing also). But anyway I had a wonderful weekend with wonderful people at . Sigrid’s mittens are almost done (only thumbs are not done). I started to do a naalbinded hat for me for next time we are sleeping at a tent. Ahh.. I can't write more today my brains are not working :). But here is some pictures.. 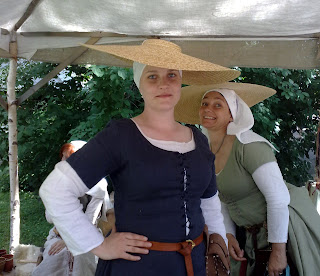 Sahra and me at the Market with our new strawhats 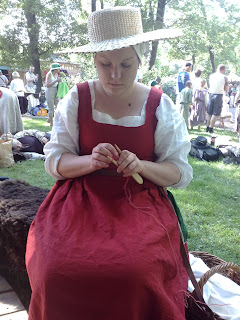 Elsa making a cord with lucet

Today is the day when the Turku Medieval Market opens. We have packed our things and we are ready to go. I am going to wear simple and light weigh medieval clothes and my new straw hat because it has promised lots of sunshine for the weekend. Today we are planning to do some shopping and tomorrow and day after that we’ll help Sahra and others and canton of Unikankare (SCA people at the Turku area) have display there so we are planning to go there also. I will bring my naalbiding stuff with me if somebody wants to see how to do it. I also have my unfinished renaissance socks with me.
Posted by Eva Grelsdotter at 10:21 No comments:

We are back from Midsummer Coronation and from a very beautiful event site Storholmen () http://www.storholmen.org . I am very tired and happy that today I have a day off from work. There is so much to tell about the event and I don’t know where to start :). It was nice to meet old friends and make new ones as well. The people at the Viking age village Storholmen was hospitable and kind. They have made lots of work at the village to reach its splendour. And what a beautiful garden they had there! I didn’t took any photos of my own at the event.. I was too lazy to do that but there are once again some good photos at Sahra’s blog.

This is one of Sahra’s photos of Baroness Katariina, Knut, UlfR and I. 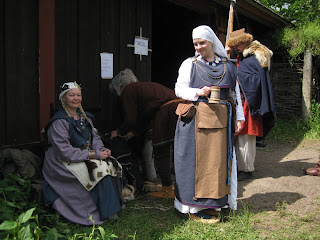 The coronation itself was also very beautiful event. The new King and Queen of Drachenwald had made a big effort to make the ceremony exquisite. Part of the ceremony was in Latin and they come to the ceremony humbly without shoes. At the Saturday feast King Gerhardt and Queen Judith announced that we UlfR and Eva are the next baron and baroness of Aarnimetsä (). Our Investiture is going to be held here at Aarnimetsä 11th-13th of September 2009. After that I don’t know what the future is going to hold for us but one thing is sure, there we are not able to be at the kitchen at the events for two years. Lots of people have been asking about are we going to miss the kitchen and the answer is sure! But it is good to have other challenges at time to time.

Before that there will be other events. This Thursday we are leaving to Turku Medieval Market (which is going to last till Sunday). Sahra and Suski are going to sell there jewellery, naalbinded things, tablet woven braids etc. Elsa and I have promised to help them.

Posted by Eva Grelsdotter at 17:43 No comments:

Yesterday was very hard day at work so after that I was too tired to do anything....

I hand sewed about 15 meters seams last week (mostly at weekend) and that means my blue linen Eura underdress and (un-dyed) linen apron (with tablet woven decorations) are finished. I now have clothes for camping and rolling in mud if needed :D. I decided not to make pants for UlfR... I didn’t have enough time for make the Thorsberg trousers and I had lots of other excuses not to do the pants yet. Today I will do some packing for Summer Coronation.

Btw. we have a hand sewing challege at our barony. It's about hand sewing 1000 meters of seams. I am definetely participating to that :) and I will send my progress here also. The challege begun at Summer Nights event.

Lady Eilgri Beccan our regional (SCA) embroidery guild head has opened a blog for Aarnimetsä's embroiders! The blog is in Finnish and can be found here: http://kirjontakori.blogspot.com/
Posted by Eva Grelsdotter at 12:57 No comments:

Results from the second dyeing 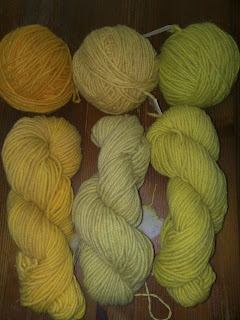 The balls are from the first dyeing and the yarns from the second. The first one on the left is onion, the second is tansy and the third is lupin. Dyeing was so fun that I can't wait to have more time and space for another dyeing experiments :D

Posted by Eva Grelsdotter at 20:29 No comments:

I am not tired which is very weird considering lack of sleep from last weekend. Summer Nights was once again fun event! The theme was this time a tavern and travellers stopping for night at the tavern. There wasn’t the usual feast this time but food was served like at restaurants. Travellers ordered plates full of different kinds of food according to traveller’s taste and dietary habits. For example I ordered the plate with all sorts of delicacies and UlfR ordered the plate full of meat. The idea was very good and so was the execution (60 people got their food in about half an hour!). But I still think that you have to have the master planner gene in you (that Sahra has) to execute the idea that well (and very competent staff at kitchen that she had... Elzebeth, Filisia, Ingeborg, Lempi and Ilona). UlfR got is new cloak at the event and managed to got he’s first burn mark to it at the camp fire. Well that only means that the wool in the cloak is real wool. And I got more bronze spiral material, a tablet woven belt and a yarn of wool dyed with woad from Suski..

Today Sahra and I talked about the Summer Coronation. I need another apron for camp fire (I don’t want burn marks to my new wool apron) luckily I have some undyed linen at home. I don’t necessary have to make a tablet woven belt to me now because Suski gave me one. I already re-hemmed and shorten my white Eura style linen underdress for the Summer Nights so that’s done. I will continue to sew today the blue linen Eura style underdress together. I don’t know about UlfR’s new pants yet.... I had bad luck with the pants last week. I started to make the pants and the work was almost done when I found out that the wool I was using was miserably bad. It already had a small hole in it. I realized that the pants wouldn’t last without braking for an event. I was quite pissed after finding the hole and after that it has been very difficult to start making new pants and I am not sure if I have enough good wool for it (it was about 4 hours handsewing for waste).

UlrR’s tunic is done :). It wasn’t very easy to make the tunic because the sleeve construction was quite challenging. I have hardened the shoes with beeswax and his socks are finished also. It looks like we are not going to have very good weather at next weekend so it means that we have to take lots of warm wool clothes with us to the Summer Nights event. 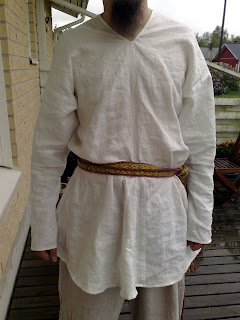 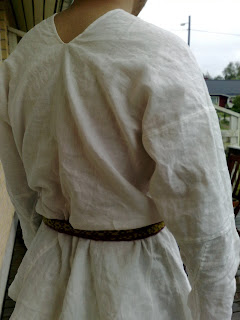 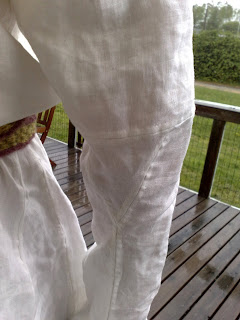 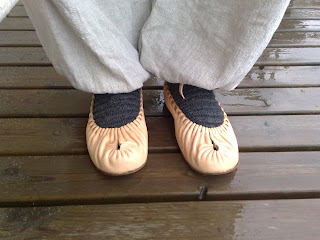 More clothes for my Lord

Lady Sahra has made a new cloak for UlfR. We will see the cloak at next weekend. I know that it is fantastic. It is made with two thin wool fabrics (inside it is brown and outside blue). She has made a tablet woven band with hand dyed logwood wool threads to decorate the cloak with some bronze spirals. And there is also (big) real wolf fur decoration at the neckline. Of course everything hand sewed. She has posted some making of photos to her blog ...

It’s summer time and everything is relax... not. I have only one weekend not planned full at this summer. It is not a new situation... it’s like this every year. There is too much things to do at summer and summer is always too short. There are always some things that I would like to do but I have no time for it. It looks like we are not able to go to Tofa’s herbal party because it’s one week before the Summer Coronation. We need to plan Cudgel War’s foodstuff and time is running up very fast. Again we are going to make lunches and snacks at Cudgel War (nine days long event). It is also my only summer vacation so I am waiting for that very much. The situation with the foodstuff is not bad at all, we have many ideas written down but it takes quite lot time to write everything to the computer (every recipes and lists). And then there are the clothes I was planning to do before the Summer Coronation. I had hopes to have something new for UlfR for next weekend’s Summer Nights event.. I don’t have many days left. I have to harden our new leather shoes with beeswax before using them (I might need some tar for soles.. or something heavier than beeswax) and UlfR’s Kragelund tunic is almost done and his naalbinded socks but I haven’t started to make the pants yet. And my blue linen Eura style underdress is not even nearly done. I think that I am just little bit too tired today. I went to yesterday because I had a work related meeting there (had to woke up crazy early … 5 a.m.). But I found some long pepper at Hakaniemi market place after the meeting so the trip to wasn’t fruitless :D. I better go to sew little bit more and go to bed early. Next weekend is going to be fabulous. I am quite sure about it!

Posted by Eva Grelsdotter at 21:06 No comments: 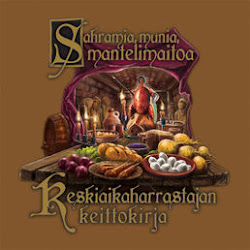 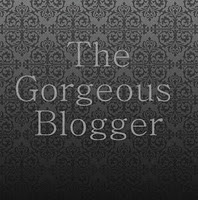